Back to All Crystals

Quartz encompasses a great many varieties of crystals that often are thought to be different types of gemstone, but are in fact another type of quartz. As well, within this family, there are other stones, which have their own little “families” as well.

More people collect quartz than any other crystal in existence. The reason is simple. High-quality quartz is such a beautiful stone and can be found across all the continents. The most common types of quartz crystals include clear quartz, amethyst, citrine, rose quartz, and smoky quartz.

The properties of these crystals are not limited solely to the metaphysical. Quartz is used in the electronics industry to both resonate and filter electronic frequencies. So they are perfect tools for aligning our energy bodies.

Quartz is a very powerful mineral, and it has been used for many purposes throughout history. It was first called querkluftertz in German by people who believed the quartz crystals had petrified lightning bolts from Zeus's thunderbolts or that they were preserved ice made manifest from frost giants' mouths. The Romans named them "krustallos," which translates to crystal as well as meaning icicle because of their belief that these jewels reminded them of iced gems formed deep within glaciers near Mount Olympus (home to Greek gods). Thousands of years ago when Sumerians invented writing, quartz was probably one of the first gemstones to be written on and also used as a stamp to make a written impression in clay.

Crystal Quartz is a high vibration crystal. It is the most powerful and versatile healing stone. It can be used by itself or in combination with other crystals to bring harmony, order, clarity, and alignment to any situation concerning health and wellness. Quartz crystal amplifies energy which makes it a very powerful catalyst in the manifestation process. Crystal quartz aligns all chakras and subtle bodies, heals, grounds, and protects. It aligns the physical, mental, emotional, and spiritual bodies with the etheric body to ensure optimal health. Crystal quartz works on all levels of our being: physical, emotional, mental, and spiritual.

Quartz crystal meaning is abundant. Perhaps the most widely known use of quartz crystals is in watches, where they are used to help keep time. Quartz crystals are also used for meditation and healing purposes. The high-energy quartz crystal meaning can clear your mind, body, and spirit of any clutter so you can align your highest self and live life at its highest potential. The rock crystal quartz stone helps drown out the noise from outside world or internal distractions so you can see a vision of your ideal life in your mind's eye and work toward manifesting it into reality.

Quartz Crystal is a mineral that is used as a gemstone, in the form of clusters or single crystals. Quartz Crystals are believed to increase intuition and psychic abilities by helping people become more aware of their own energy fields. Quartz crystal can also be used for manifestation programs because they are said to help people attain their goals with increased will power and visualizations. Quartz Crystals are known as "dream stones" because it is believed that they can show you your dreams, and assist in solving problems during the dream state.

Some people wear quartz crystals for spiritual healing or energy enhancement purposes, as they are believed to balance yin-yang energies and enhance spirituality. Wearing quartz crystals for those who hope to appear more attractive may result in drawing positive attention from others. Quartz crystals also provide protection against negative outside influences and emit its own positive and protective energy. Some people are skeptical about the metaphysical properties of quartz crystal and believe that all claims are superstition, but the fact that so many people put their trust on these beliefs convey how powerful quartz crystals can possibly be if you actually experience it yourself! 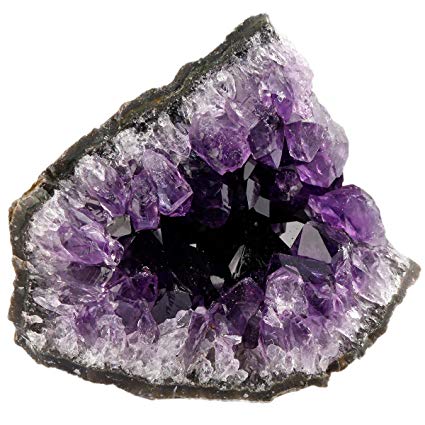 Amethyst is a royal, luscious, rich, seductive, vibrant, and alluring purple variety of quartz mined at many locations throughout the world. Amethyst gets its color from iron and aluminum impurities inside the underlying quartz structure.

The colors range from light purple to deep violet to pale red-violet (pink amethyst). The deep purples and pinks are the most valuable, particularly a rich purple with rose flashes.