How an obsession with death led to great jewels 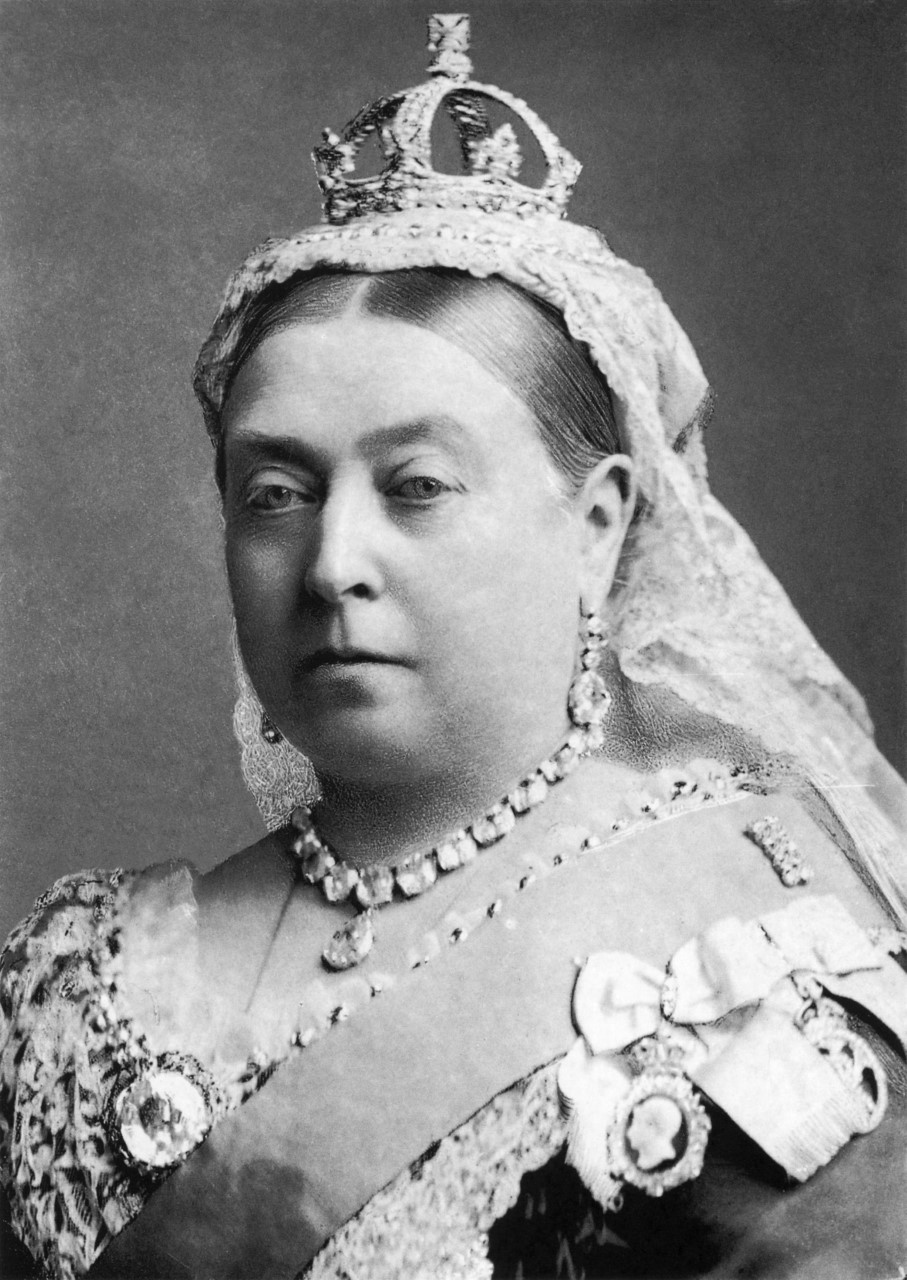 Queen Victoria was the monarch of mourning. After the death of her husband Prince Albert in 1861, she famously spent the next four decades shrouded in black dresses and jewels—lots of jewels. She had what you could call an obsession with jewelry and commissioned countless pieces to remember her dearly departed husband and close relatives.

On March 24, several of those highly personal pieces will be up for auction for the first time ever at Sotheby's, courtesy of the collection of Patricia Knatchbull, a great-great-granddaughter of Queen Victoria, the first cousin to Prince Philip, and the daughter of Britain’s last Viceroy of India, Louis Mountbatten. 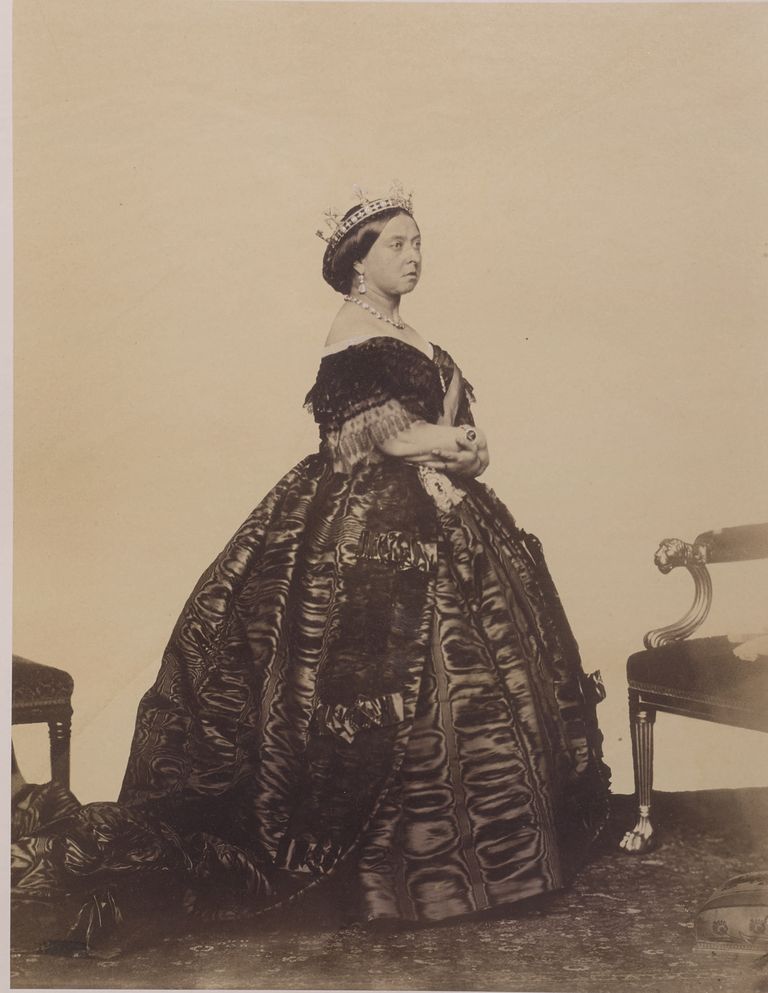 “Queen Victoria was the biggest jewelry influencer of all time,” says Rebecca Selva, creative director of Fred Leighton. “She made mourning jewelry fashionable and imbued the pieces with romance. And everyone in court followed suit.”

Up until Queen Victoria’s reign, mourning jewelry was often wickedly macabre with symbols including skulls, crossbones, and reapers. That wouldn’t work for the romantic ruler who had enjoyed a loving relationship with her husband, so she commissioned remembrance jewels with floral and heart motifs, and miniature portraits of the deceased. 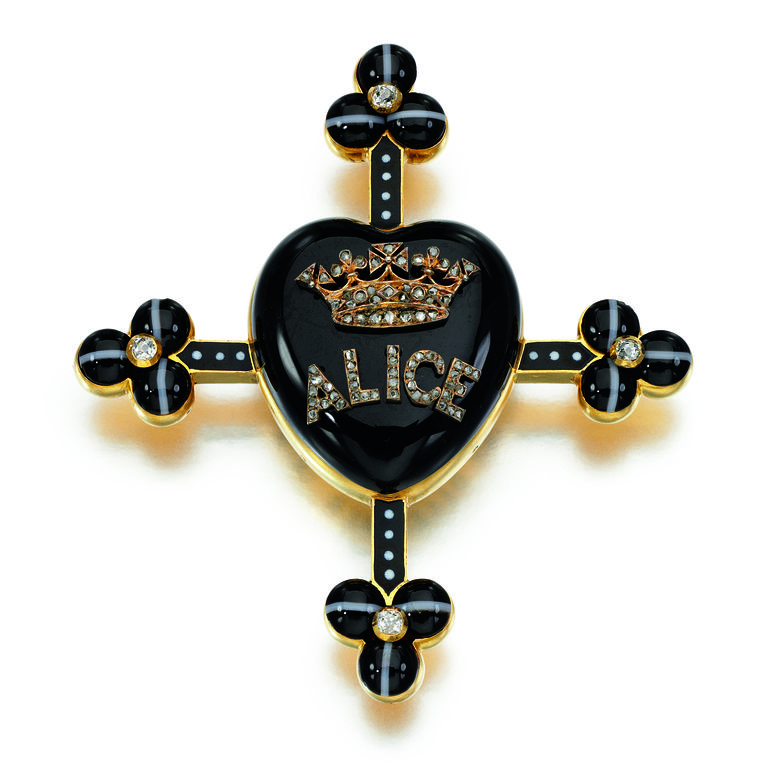 A hardstone enamel and diamond cross centring on an onyx heart with "Alice" beneath a coronet, which also holds a lock of hair, is part of Queen Victoria’s collection of mourning jewelry being sold at Sotheby’s.

That spirit is reflected in the pieces coming up for sale at Sotheby’s, which were inherited through generations of royals. Among the heirlooms: an enamel and diamond cross with an onyx heart with the name of Victoria’s daughter Alice (who died in 1878 at age 35) under a coronet, and another onyx and seed pearl button holding a miniature portrait of the princess. Some pieces hold a lock of hair, which during the Victorian era was believed to contain the essence of a person.

Queen Victoria’s passion for jewelry also reflected her love story with Prince Albert, who personally designed and commissioned numerous jewels for his wife during their marriage. “She and Albert were huge jeweler lovers,” says Kristian Spofforth, head of the jewelry department at Sotheby’s London. “After Prince Albert’s death she thought that by continuing their passion for jewels, it was keeping that love alive.”

And so the royals’ great love inspired a more sweet and subtle style of mourning jewelry during this era, with symbolic cherubs, clouds, crosses, and anchors (which denoted unwavering faith), and pearls as a symbol of tears. 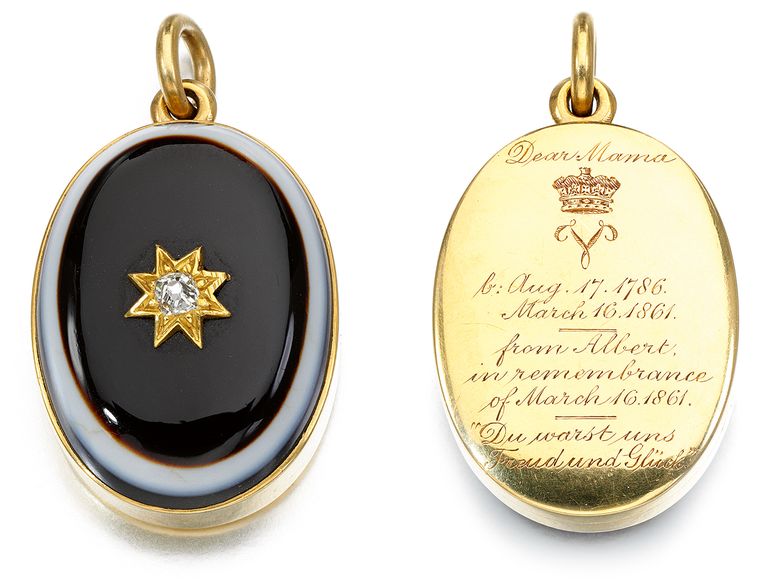 Also from the Sotheby’s sale: An agate and diamond pendant, commissioned by Prince Albert for Queen Victoria to mark the death of her mother, which opens to reveal a miniature photograph and features an inscription on the back by the Prince Consort.

Mourning jewelry was also designed to remind you that death isn’t too far off.

The tradition of mourning jewelry began in the Middle Ages at a time when people were consumed with death, literally. Disease was rampant and life expectancy was short, and jewelry was a physical embodiment of the concept of memento mori (remember you will die) and was decorated with icons of death, like skeletons and cross bones. “Memento mori jewelry did not typically commemorate a particular person, but represented the idea that one should live their life to the fullest because death isn’t far off,” Spofforth says.

Another popular expression of remembrance in the 17th and early 18th centuries were gold and enamel memorial rings, often purchased by the person in advance of their death and bequeathed to family members and friends posthumously to remember them. The memorial rings were inscribed with the person’s name and date of their death.

In colonial America, the death of George Washington in 1799 sparked a greater interest in mourning jewelry, says Beth Wees, curator emerita of the American Wing at the Metropolitan Museum of Art, where the collection includes a gold mourning ring, circa 1800, with an enamel portrait of the founding father. Other popular types of jewelry included lockets with human hair and miniature portraits. “Hair was popular in lockets because it was a way to keep people close to you, even in death,” she says.

The fascination with hair was especially pertinent during the Victorian era because people believed that it had a sacred and immortal quality. Beyond incasing a lock of hair in a locket, they also braided hair into earrings and chains—and it proved surprisingly resilient.

There is a renewed interest in mourning jewelry today.

Blame it on the pandemic—and on people feeling especially sentimental during this time. “Mourning jewelry speaks to the feeling that life is precious, and it speaks to where we are now,” Selva says. “We are in this romantic phase. People are creating stories with their jewels, stacking and layering with charms and talismans, and mourning jewelry is full of stories.” Fred Leighton’s selection includes beautifully crafted memento mori rings from the early 18th century, one with a skeleton holding a shovel, and another diamond ring that is set in white enamel, which signified an unmarried woman or a child. 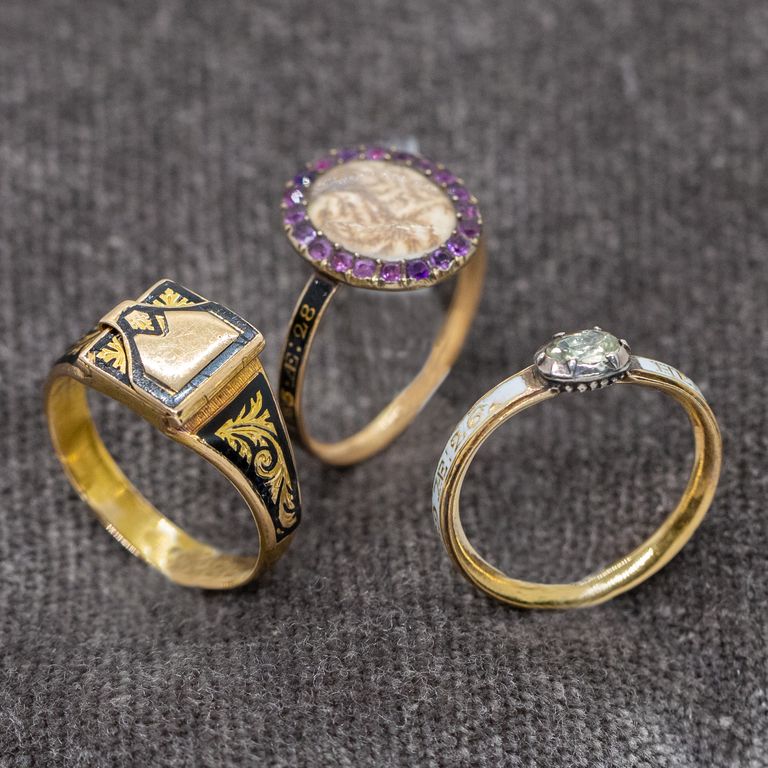 The interest in Victorian jewelry has been on the rise for several years, according to Anthony Barzilay Freund, the editorial director of 1stDibs. Boosting that interest is the current global health crisis. “It has certainly made us all feel more emotionally expressive and nostalgic, and the unabashed sentiment and decorative exuberance of Victorian mourning jewelry seems particularly right for these times," he says.

The 1stDibs website has more than 100 pieces of mourning jewelry with an average price of $2,125, from Georgian and Victorian examples to modern interpretations. They range from cameos and miniature portraits to hair lockets and pieces engraved with “In Memoriam” or personal tributes.

The less macabre styles, made in jet, onyx, and agate, tend to be simple and could be appealing to a younger audience, says Sotheby’s Spofforth. “These pieces are full of history and stories, and you'll have a lot to talk about," he says. "If you’re lucky enough to buy the jewel that belonged to Queen Victoria, well that’s a story.”