Nature’s gemstones come in a miraculous menagerie of different colors, covering just about every shade of the rainbow. But when we talk about the ‘color’ of a gemstone, what are we actually referring to? Usually, the word color refers to which part of the spectrum our eyes interpret when we see an object, such as red, blue, green etc. But this is only part of what makes up the physical appearance of a gemstone.

Let’s take a more in-depth look at what the word color means, and the three constituent parts of color that we often refer to when talking about gemstones: hue, tone and saturation.

The world we live in is full of light, which can be broadly broken down into seven different wavelengths, with each wavelength relating to one of the seven colors seen in a rainbow: red, orange, yellow, green, blue, indigo and violet. These seven colors are known as the visible spectrum, and the wavelengths of each color have different lengths. The bluish colors have the shortest wavelengths, the greenish colors fall in the middle, and the reddish colors have the longest. When light hits an object, depending on the type of material, some colors are absorbed, and some are reflected. The reflected wavelengths are what our eyes perceive as the color of the object. Wavelengths outside of the visible spectrum cannot be seen by human eyes but are still useful in technology. Beyond the red wavelength, we get infrared, microwaves and radio (broadcast) waves. At the other end of the blue wavelengths, we get ultraviolet, x-rays and gamma rays. 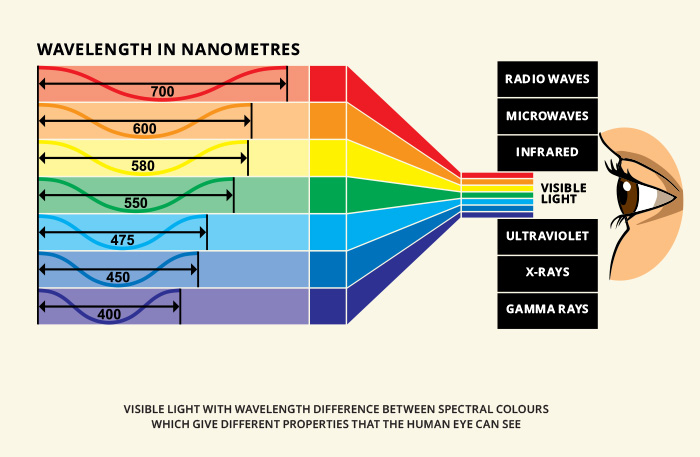 The differences in hue, tone and saturation (more on which is coming up) seen in gemstones are due to the presence of different elements, and often the same gem can be found naturally in a multitude of different colors. Take Garnet, Spinel and Tourmaline as examples. These three gemstone families are all available in a broad spectrum of colors. This is due to not only the differences in their respective chemical compositions but also their different physical structures and, sometimes, their inclusions. The depth of color in a gem, amongst other things, can significantly affect the value of the stone. Generally speaking, the more vivid the color, the higher the value. Unfortunately, with some gems such as Emerald and Bixbite, better depths of color are usually caused by a higher occurrence of inclusions and imperfections. When it comes to Diamond, valuations relating to color are very different compared to almost all other gems. A Diamond’s value is usually higher the nearer it is to colorless.

There are many reasons why colored gemstones have been worn for thousands of years, such as folklore, legends, myths, associated healing benefits, as talismans, birthstones and zodiac gems. These are are all exciting topics that relate to gemstones and often act as an inspiration to acquire a particular piece. But for us, the most important motivator for buying any gemstone has always been its color. If it’s vivid, beautiful, and reminds us of other gorgeous colors seen in nature, then we simply have to have it. Let’s now break down the three main elements of color: hue, tone and saturation.

The word ‘hue’ refers to what we might traditionally refer to as the ‘color’ of a gemstone. Red, orange, yellow and all the other colors we learned at school are, at a scientific and gemological level, actually known as hues. One way of understanding hues is to imagine an artist creating a beautiful painting. Without the addition of either black or white, the artist can create most hues by mixing the three primary colors of red, yellow and blue in differing quantities. For example, reddish orange (think Madeira Citrine) and greenish blue (think Turquoise) are both hues that can be created in this way. 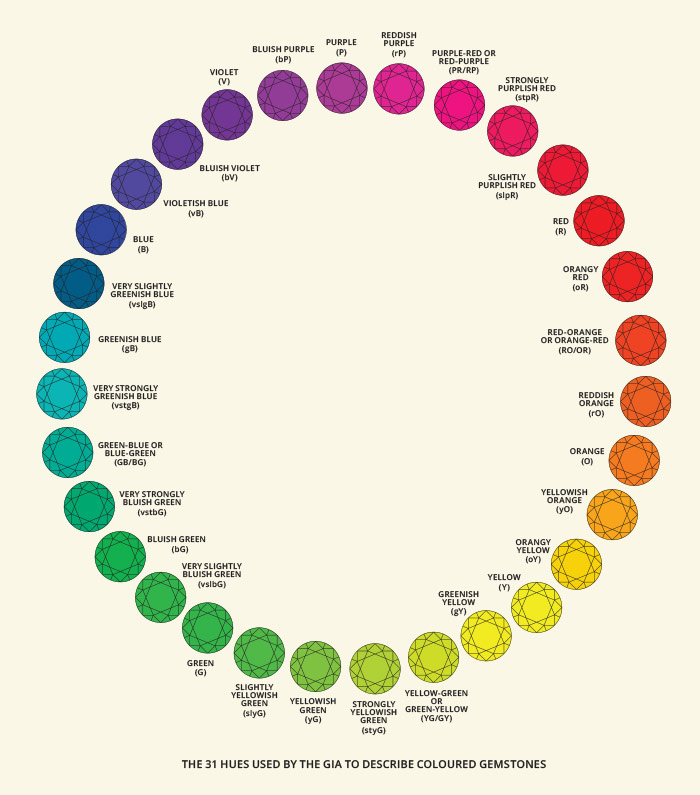 The Gemological Institute of America (GIA), one of the world’s leading groups on gemstones, use just 31 hues to describe nearly all colored gemstones. You can see these represented above, along with the name of each hue and the letter codes that are used by the GIA (and many other industry bodies) to describe each one. These codes may be useful to you if you ever have your gemstones valued, as you will often see these codes on your valuation certificate.

The letters used in these codes are the initials of six main hues: red (R), orange (O), yellow (Y), green (G), blue (B), and violet (V). You’ll notice in these codes that the strongest hue always comes last, and is capitalized, with the secondary hue coming first and in lowercase. For example, yellowish orange is ‘yO’. These codes can then, in some cases, be prefixed by slightly (sl), strongly (st), very slightly (vsl) and very strongly (vst). So very slightly greenish blue reads as ‘vslgB’. As well as these 31 GIA-defined hues, here are two generally accepted additions to the chart, pink (Pk) which is a light red and brown (Brn). When valuing a colored gemstone, most people in the industry will agree that the hue of the gem is the most critical evaluation criteria.

When you take a look at the chart to the right, it’s almost effortless to picture beautiful gemstones that match each hue from the vast range of natural stones that can be found in nature. But what about the lighter and darker gems? For example, Zambian Amethyst might match the bluish-violet hue, but how are lighter Rose de France Amethyst stones and darker Moroccan Amethyst stones accounted for? That’s where tone and saturation come into the mix.

If the hue explanation seemed a little complex, you’ll be pleased to know that this one is black and white! We can forget the color scale for a second - the easiest way to explain tone is to demonstrate that colorless Topaz, colorless Quartz and flawless Diamond all have zero tone and zero color. Black Onyx, Black Diamonds and Jet, on the other hand, have 100% tone - but they also have no color. 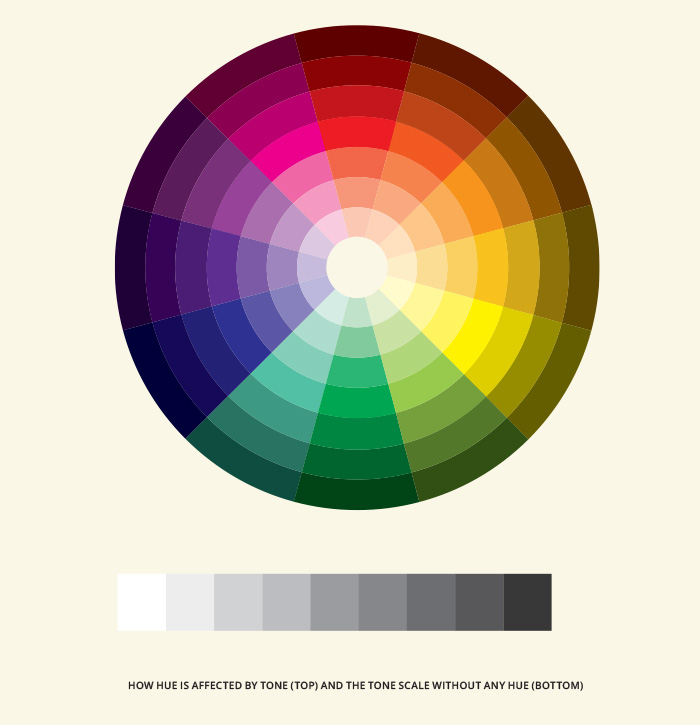 Let’s reintroduce some color and get back to the Amethyst we mentioned earlier. Amethyst is the purple variety of Quartz, which is clear if it has no tone. If it has a slight tone, we call it Rose Quartz. If its tone gets a little stronger, we call it Rose De France Amethyst. With another 10% more tone or so, it becomes a lovely Amethyst. Another 10% tone and you are now looking at very desirable Uruguayan or Zambian Amethyst. A little more and we’re in the territory of Moroccan Amethyst. If it goes darker, say 90% tone or above, it gets too dark to see the color and its beauty and its value diminishes rapidly. In fact, most people aren’t aware that while many gemstones are heat-treated to increase the tone of a gem, Amethyst is frequently heat-treated to reduce its tone. So what is the perfect Amethyst? Well, it’s the one with a perfect balance of hue, tone and saturation, something that is known gemologically as its gamut point. You want it undeniably purple (hue), you want it to be vivid in color (saturation), and you want it to be at the darker end of the tone scale rather than the lighter end.

Now, this gets really interesting with Tanzanite. When it comes to grading Tanzanite, we follow the guidelines set out by Safeguard, which is a division of the Birmingham Assay Office (one of the four offices in the UK that hallmark precious metals). Their top-grade Tanzanite based purely on color tone is AAAA. However, this is close to 90% tone, whereas their second-best grade is AAA which is nearer 85% tone. Therefore, in theory, AAA graded Tanzanite should be more visually appealing than the higher graded AAAA. On this point, scientists who specialize in color have, for a long time, written that there is an optimum saturation and tone for each hue. Color scientists believe that the optimum tone for blue is 85%.

One final note on tone. The reason brown and pink aren’t officially included as hues on the GIA list is that orange and yellow hues with high tone would create brown hues, and red and purple hues with light tone would create pink tones. Now, let’s throw saturation into the mix.

Saturation is most simply described as the amount of color in the gemstone. Let’s stop for a drink of orange squash - imagine two glasses of clear water. Into one, we add just the smallest amount of cordial, but into the other, we put in far too much. We now have a very lightly saturated glass of orange squash and a very deeply saturated glass. Hues with very little saturation might are sometimes called pastel, while those in the middle might be called muted and those with high saturation are known as vivid.

Let’s bring this back to gemstones. Image a Prasiolite next to a Changbai Peridot. One isn’t very saturated, and one is. But they’re both green, and both gorgeous. Place Rose Danburite, Sakaraha Pink Spinel and Safira Tourmaline in a row, and you’ll have a great example of a saturation scale. You’ll probably be starting to notice how the tone modifies the hue too. One more. Pedra Azul Aquamarine, Swiss Blue Topaz and Ceylon Sapphire. Look at these three together, and you’ll see the full power of hue, tone and saturation at work. This, in gemstones at least, is what we call ‘color’.

Let’s talk about one final thing that can modify the look of a gemstone. It’s called a ‘mask’, and many gems can exhibit either a brownish or greyish tinge to their color. It’s not always instantly noticeable, but it tends to be there, especially on gems with lower saturation. Different gemstones tend to have different masks. All Sapphires that are not vivid in saturation will have a tinge of grey. If a Rubellite’s appearance is anything other than bright red, you will often notice a brownish mask. The less vivid the saturation, the more of the mask you will see. If a gemstone was pure grey or pure brown, it would be described as having zero color saturation. As a general rule of thumb, the higher the saturation in a gemstone, the more valuable it becomes. Sometimes the saturation is even more important than the hue itself. For example, a violetish blue Sapphire with a vivid saturation would most likely cost more than a pure blue Sapphire which had a greyish mask.

If you refer back to the opening diagram of this feature, you will now see why these three modifiers of color have to be represented in 3D and, hopefully, you’ll see how they all work together to give us so many beautiful variations of natural gemstones. We hope this explanation has expanded your understanding of color in gemstones, but ultimately only one thing matters when you add a new gem to your collection. As long as you love how your new stone looks and how it makes you feel, everything else is just added color.