A visit to the renovated hall of gems and minerals at the American Museum of Natural History reveals how the cosmos works in the real world. 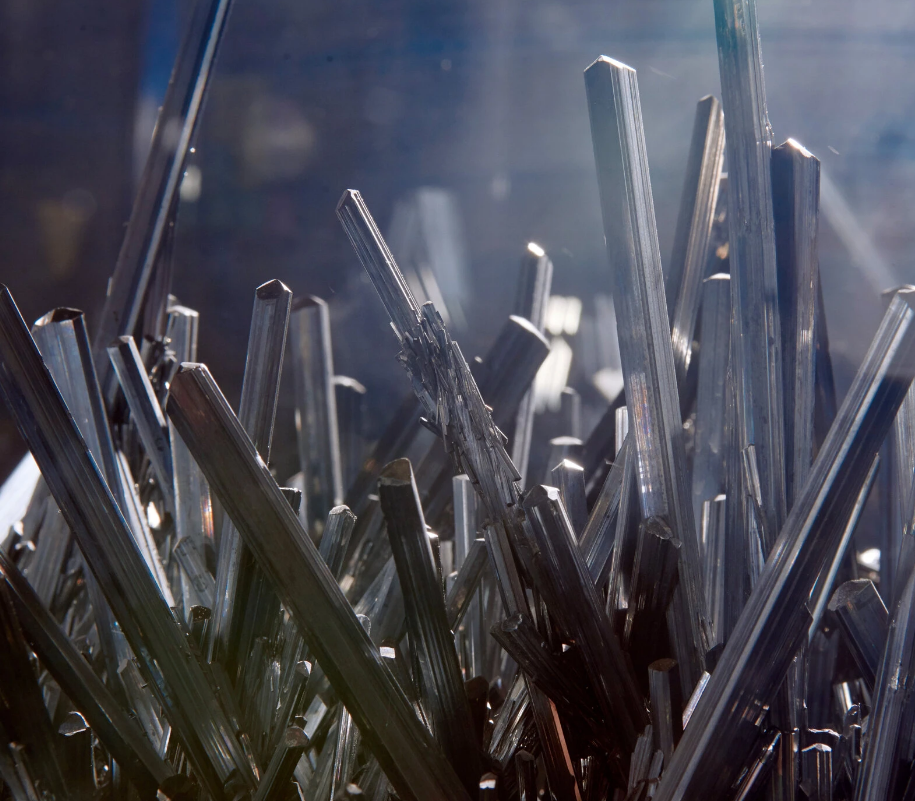 One day in October 1820 two young men, Elijah Hamlin and Ezekiel Holmes, were hiking on a hill in Maine called Mount Mica when they spotted a glowing, green stone on the ground. They picked it up and started to look for others, but darkness was falling. The next day it snowed.

When they finally returned, in the spring, they found the hill littered with such stones, since identified as tourmaline, a semiprecious gem prized for its range of colors. Word spread. In 1879 a gentleman geologist and man-about-the-world named George Kunz visited. He gave some pieces to a businessman named Charles Tiffany, who hired him on the spot. One of Tiffany’s board members was J.P. Morgan, the banker and robber baron, who started buying tourmaline and other jewels through Kunz. Much of that collection wound up in the American Museum of Natural History.

I made the acquaintance of Morgan’s tourmaline, along with the original tourmaline found by those hikers (fashioned into a watch fob inscribed with the word Primus, or “first”), on a recent visit to the newly reopened Allison and Roberto Mignone Hall of Gems and Minerals. 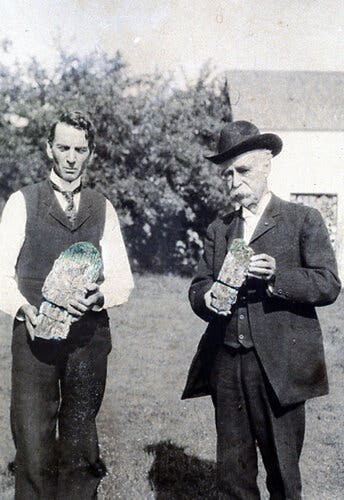 In addition to the tourmaline, I found myself gawking at a dazzling collection of crystals, some as big as tree stumps, others dainty enough to grace an Oscar nominee’s neckline on the red carpet.

Minerals, as a sign on the wall helpfully informed me, are orderly arrangements of atoms and molecules. “Most of the solid matter in the universe is minerals,” said George Harlow, a geologist and longtime curator, who patiently guided me around and seemed able to read rocks as easily as I read the morning newspaper.

“People don’t know ice is a mineral,” he noted. And snow, he added, is a sediment.

There are some 5,000 types of mineral on Earth, and I know the names of hardly any of them, although they form the substance of the world we evolved upon and presumably the distant worlds on which we hope to one day discover more life.

They tell ancient tales: of continents colliding, of mountain ranges rising and being worn down, of ocean basins folding and crumbling, of Hadean chambers breeding crystals from gas and fluids. Some of these minerals are almost as old as time itself. The nano-diamonds found in stardust could have formed in supernova explosions that occurred only a couple of hundred million years after the Big Bang, Dr. Harlow said. 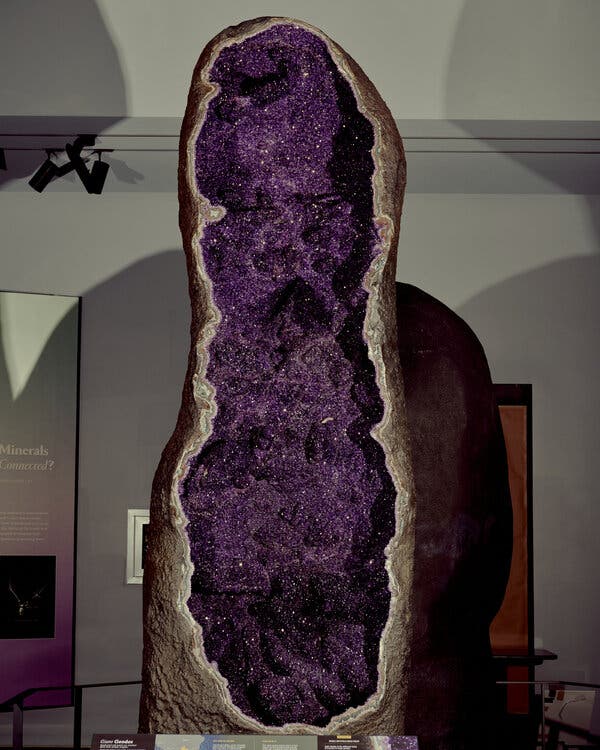 Picture: A geode from Uruguay lined with quartz and amethyst.

I felt a familiar cosmic vibe just walking into the hall. There in front of me, nine feet tall and inhabiting a rocky shell, like an egg cracked open by the gods, was a nest of purple amethysts, a galaxy’s worth of light.

A geode, it formed 135 million years ago in Uruguay when water bearing minerals leached into an underground chamber, perhaps a bubble in the magma, and then crystallized on the walls. Behind it was another geode, another purple galaxy, facing into the main exhibit, a concrete manifestation of how the real-world universe — reduced to mere dots or less in astrophysical data — actually works.

All minerals are formed by the same fundamentals: water, heat and pressure. But like Tolstoy’s unhappy families, every rock has its own story. Earth’s crust is broken into dynamic slabs called tectonic plates that bang into one another, buckle into mountain ranges, merge to create continents and separate to form seas.

Geology is biological destiny: Whatever minerals land or are deposited in a place determine what or who can make a living there millions of years later. Trout favor Montana, I am told by my fly-fishing buddies, because the streams flowing through limestone create congenial conditions for our freshwater quarry.

Millions of years ago, the Mississippi Valley was an inland sea. As geological forces squeezed the seafloor upward, water — enriched with ores like zinc and lead — seeped through the porous carbonate rocks that comprised the ocean floor, leaving deposits in pockets and veins. In 1894 a miner named James Roach broke into a cavern 80 feet beneath Joplin, Mo. The walls, ceiling and floor were lined with crystals of calcite, a form of carbonate. He and his family turned it into an underground dance hall and tourist attraction, Crystal Cave. Groundwater reclaimed it in the 1940s. 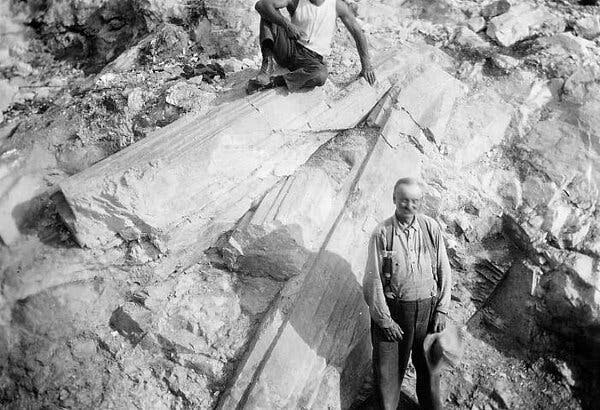 Picture: Giant beryl crystals discovered in 1928 at the Bumpus Quarry in Albany, Maine.

One of the mightiest of the stones on display at the museum is a four-foot-tall, 7,756-pound hunk of grayish-green rock called beryl, from which come emeralds as well as beryllium.

In 1930 this stone was a 14-foot lump in the Bumpus Quarry in Maine, blocking access to a vast lode of prime feldspar that the quarry owner was eager to mine. He blew it up the day before Mr. Kunz arrived with an offer to buy it for the Natural History Museum. The museum bought a couple of fragments, which sat for many years.

As it happens, beryl itself is valuable as a source of lithium and beryllium, a lightweight element born in stars and cosmic-ray collisions. The mirrors of NASA’s upcoming James Webb Space Telescope are made of beryllium. 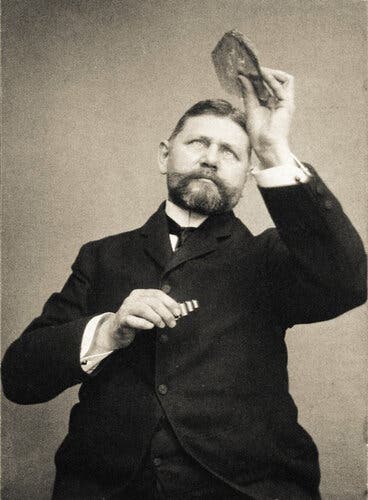 Picture: George Kunz with a sample of kunzite.

On our tour, Dr. Harlow spied more history in another goliath rock, a slab of amphibolite from Gore Mountain in upstate New York. Visible in the slab were ancient geochemical fault lines and, clustered along them, an arrangement of garnets, the ruby-color official gemstone of New York State. They traced the ancient wall, now lost to time, on which they had grown, and to Dr. Harlow offered more sentences in the book of ancient cataclysms.

I wandered across to the gem alcove to marvel at the belles of the ball, among them the Star of India, another find by the resourceful Mr. Kunz, this time on behalf of J.P. Morgan. Finally I returned to the pair of purple geodes that stood like stargates at the exhibit entrance.

Alas, their magnificence is not permanent. Amethyst, which is a form of quartz, is typically yellow or gray, Dr. Harlow informed me. The purple was a result of radiation damage, probably from the surrounding rocks in which the amethysts formed, and would most likely revert to its original color eventually. Not even stones are immortal. 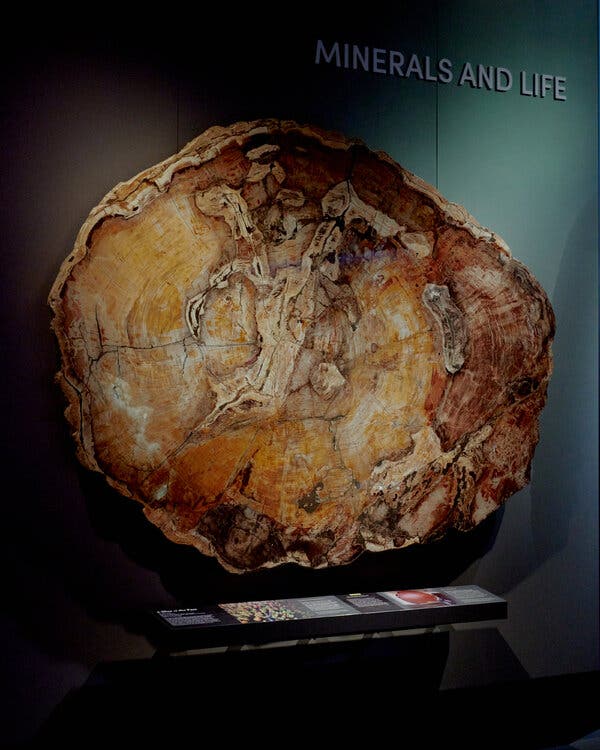 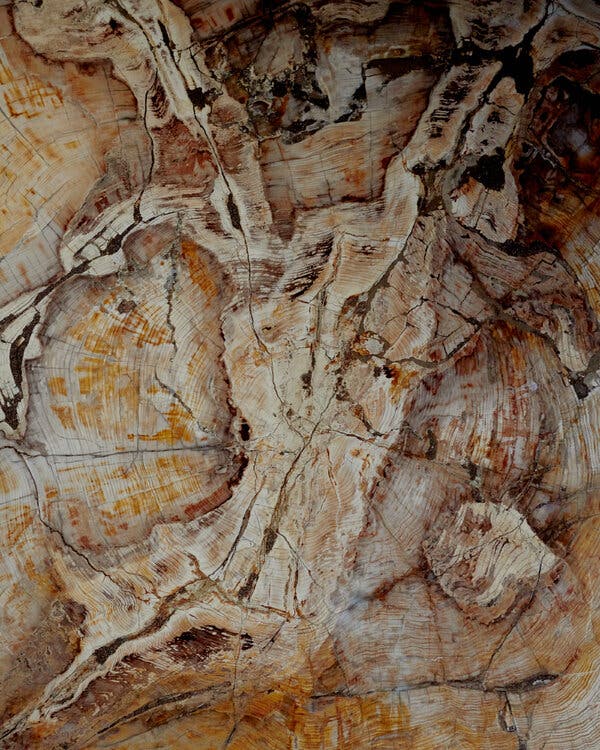 Pictures: A slice of petrified dawn redwood from Oregon that has turned to stone after being buried for millions of years.

Across the hall, directly facing the stargates, stood another intimation of mortality: a slab of petrified wood from an ancient sequoia. Museum officials have counted 884 rings and dated the tree to 33 million to 35 million years ago. In the intervening time, chemistry worked its magic and silicate minerals replaced the cellulose in the wood, while solidifying the record of growth.

Dr. Harlow pointed out a similar-size slab of redwood, cut down in 1891, around a few corners in the Hall of American Forests. The line between vegetable and mineral is not as strict as one might think, he mused: “Without minerals there is no life. Life learned how to make minerals, in teeth, bones and shells.” Eventually, life returns to minerals in the form of fossils and petrified wood.

“People think these are separate,” Dr. Harlow said. “It’s all part of a whole.”

CORRECTION: June 23, 2021
An earlier version of this article misstated the medium on which Earth’s tectonic plates float. They float on a part of the mantle called the asthenosphere, not magma.
Credits: Overbye, Dennis. "Why Geology is Our Destiny." The New York Times, The New York Times Company, 23 June 2021, https://www.nytimes.com/2021/06/22/science/natural-history-museum-gems-minerals.html.