G-4E2PH8KKLT
Home / Library / Crystals in Science and History / Iridescence: Understanding the “Rainbow” In the Mineral World 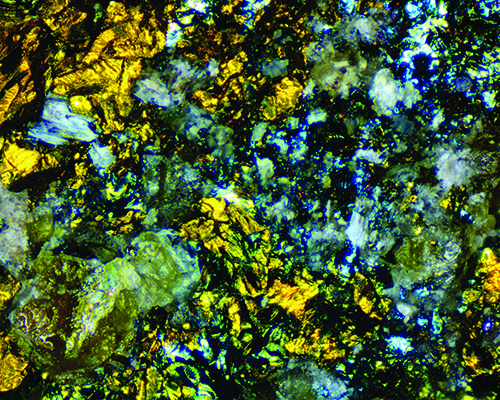 The gemstone that is synonymous with eye-catching iridescence is opal, the national gemstone of Australia. Opal is prized for its kaleidoscopic displays of fiery iridescence. It also consists of packed layers of nanoscale silica spheres. Depending upon their arrangement, these layers act as thin films and diffraction gratings to create the distinctive “patchwork” of structural colors known as opalescence.

Two other gemstones that occasionally exhibit iridescence are sunstone and moonstone, both of which are translucent varieties of feldspar minerals. In sunstone, a bright, golden glitter enlivens the stone’s brownish-red body color. This non-iridescent glitter, known as aventurescence, is caused by light reflecting from included microparticles of hematite and goethite. When these particles act as diffraction gratings, the stones exhibit a greenish iridescence. Moonstone is named for its soft, moon-like, silvery-to-bluish-white sheen. This non-iridescent effect, called adularescence, is due to microscopic inclusions or lamellar twinning planes that diffuse light. These inclusions and planes can sometimes cause thin-film or diffraction-grating interference that creates a delicate blue iridescence. Less common is “rainbow moonstone” with its array of pale cyan, green, and gold structural colors. 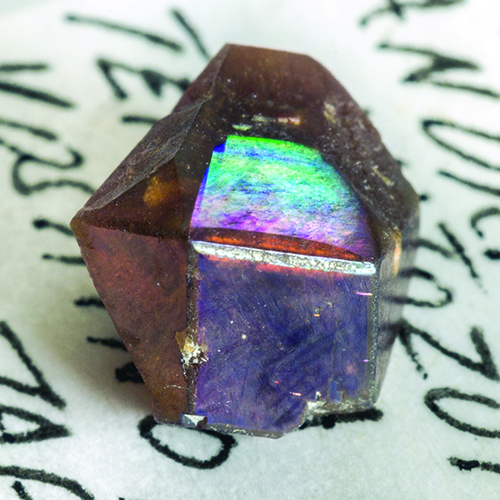 A thin film of iron-oxide minerals creates a bright iridescence on the face of this andradite crystal.

Iridescence also appears in certain forms of quartz. Rock crystal from a locality in India’s Deccan Traps has an intense iridescence, but only on specific crystal faces. Scanning electron microscopy reveals that these faces’ surfaces consist of the periodic ridges and grooves of repetitive twinning. These function as diffraction gratings to create the bright iridescence of “rainbow quartz,” fine specimens sold for thousands of dollars.

Surface coatings of particulate goethite and hematite can produce surface thin-film iridescence in rock crystal, while the interfaces of twinning planes and fracture surfaces can cause internal diffraction-grating iridescence. In botryoidal forms of translucent fire agate, a play of green structural colors sometimes accents the stone’s brownish-red base color, an iridescence caused by coatings of particulate goethite on internal growth-layer interfaces.

Iris agate exhibits a very unusual iridescence. In reflected light, finely banded, semitransparent iris agate has a drab, gray body color. But when backlighted, thin slices cut perpendicular to the banding produce a circular rainbow of structural colors, called an “iris,” due to the diffraction-grating effect of microscopic growth layers. The brilliant iridescence on botryoidal goethite specimens is due to microscopic surface layers of “turgite,” a mix of goethite and hematite that causes thin-film interference. Turgite films also create iridescence on fracture surfaces of flint and other types of microcrystalline quartz.

Abalone shells and certain other seashells are also often iridescent. These shells’ nacre linings consist of tightly packed layers of hexagonal platelets of aragonite, the orthorhombic polymorph of calcium carbonate. These act as diffraction gratings that impart a soft, pink-and-green iridescence to the shells’ inner surfaces. Fossilized shells of nautilus-like ammonites, notably those from the Bearpaw Shale formation in Alberta, Canada, show intense magenta-and-green structural colors due to the diffraction-grating effect of their aragonite layers. Iridescent fossilized ammonites are sold commercially as “ammolite” and worn as pendants. Most pearls have uniform, non-iridescent, white, or cream body colors. But when nacre layers cause diffraction-grating interference, pearls can appear multicolored with an overtone or “orient” of soft, pink-and-green iridescence. 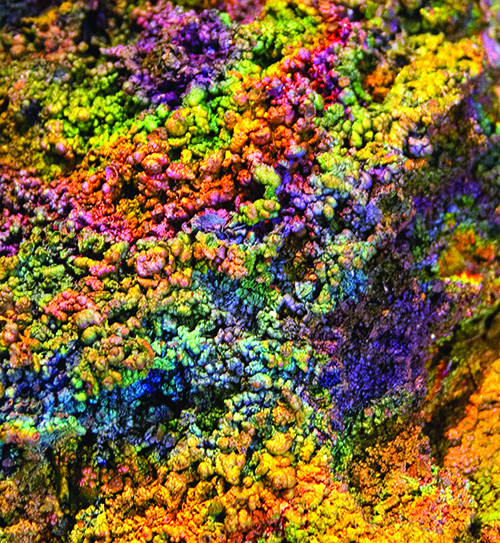 Turgite, a mixture of goethite and hematite, often exhibits a full range of structural colors.

Certain human-made materials are also iridescent. Most ancient glass, and even modern glass that has been buried for a few decades, become iridescent when weathering separates its surface into thin films. Mass production of synthetic, iridescent materials began in the early 19th century when European ceramic artists began mixing silver and copper oxides into glazes for fine china. High-temperature firing reduced these oxides to metal microparticles that acted as diffraction gratings. In 1894, the American jewelry and decorative-art designer Louis Comfort Tiffany patented a similar process to manufacture his famous line of iridescent “Favrile” glass.

The intensely iridescent, synthetic bismuth crystals often seen in rock shops and at gem-and-mineral shows are made by cooling molten bismuth slowly so that it solidifies into “hopper”-shaped crystals.

The playing surfaces of polycarbonate-plastic CDs and DVDs are another example of human-made iridescence. These disks are engraved with thousands of nanoscale grooves and ridges arranged in spiral tracks and coated with a bright, metallic finish. These highly reflective, diffraction-grating surfaces create a wide range of iridescent colors. Material scientists have recently developed lacquers and paints that impart iridescence to such products as cell phone cases, fingernail polish, and automotive finishes.

But not all structural colors are iridescent. One example is the kaleidoscopic “patchwork” patterns seen in photomicrographs of thin sections of rock. These structural-color images of a rock’s microcrystals are caused by cross-polarized light reflecting from, or passing through, birefringent mineral crystals. Because these structural colors are mineral-specific, they help to identify the rock’s mineral components.

Artificial iridescence can be readily imparted to non-iridescent mineral specimens, and iridescence’s intensity can be enhanced on those that are naturally iridescent. The colorful, iridescent “peacock ore” sold in rock shops as “bornite” is usually golden chalcopyrite that has been oxidized by acids or rust-removal compounds to produce an artificial iridescence. Bleach can also induce an attractive iridescence to disk-shaped pyrite “suns.”

With its vivid colors and infinite variations, the beauty of iridescence is indeed in the eye of the beholder. But however it is described, iridescence is one of the mineral kingdom’s most beautiful displays of color. 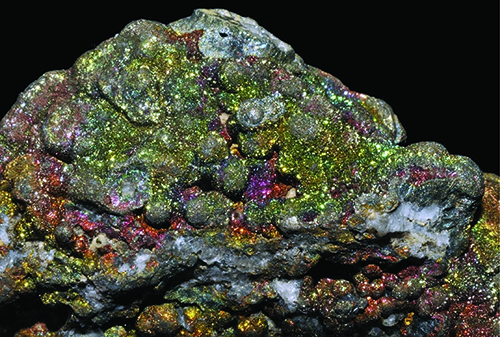 In this bornite specimen, the primary structural colors are gold and magenta.