Back to All Crystals 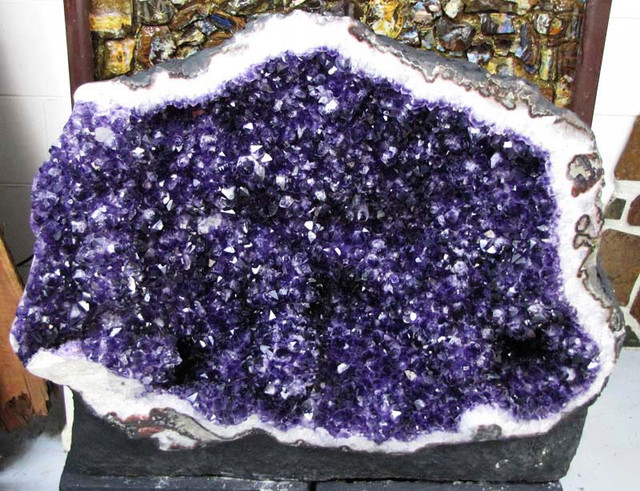 Amethyst being one of the most common crystals has, of course, found itself a spot in each collection and is many peoples’ favourite crystal. Having a beautiful transparent purple colour and coming in all shapes and sizes, it’s easy to see why so many people love it. It can be found all around the world and makes appearances in the history of many cultures.

It forms within volcanic rocks just like many other crystals (it is in the quartz family after all) and is sometimes referred to as ‘purple quartz’. It grows in geodes and often, when purchasing amethyst, you will see the geode as ‘base’ still attached to the bottom of the crystal.

For a long time amethyst was rather pricey as the largest mines were located in modern day Russia and it was thought that the supply was rather scarce. That all changed quite recently, when in the late 19th / early 20th century large mines of high quality Amethyst were found in South America, Africa and other parts of the world. The majority of amethyst crystals that you come across today are likely mined in Brazils southern state of Rio Grande du Sol.

The attributes associated with amethyst are quite standard, which is not a bad thing. It is a stone that relieves you of stress, protects you from harm, elevates you to higher states of consciousness in mediation. It helps you feel more in control of your thoughts and abilities, it even helps with decision-making process, common sense and restraint. Which is how it REALLY got famous.

Ancient Greeks believed that Amethyst helped you stay sober. We know that that was a thing, but we’re not entirely sure when and how it started. One of the most popular origin stories comes from a French poet who invented a myth in which the god of wine, grapes and intoxication was pursuing a maiden by the name of Amethyste, who was not very interested in him. She prayed day and night to the gods to keep her an untouched virgin, so goddess Diana came up with a brilliant solution of turning her into a crystal (see what I did there). Bacchus, the god who had been rejected, was humbled by her desire to remain untouched and poured wine over the crystal as an offering, colouring it purple. There are many different versions of this particular story, some older than others, but all involve a woman by the name of Amethyste and the god of wine - Bacchus. Her resilience and ability to keep him away is probably where the association of amethyst being sobering comes from. The name Amethyst comes from an ancient Greek word ‘a-methysko’, which literally means ‘not to intoxicate’.

Ancient Greeks would carve wine cups out of amethyst, have necklaces and jewellery which they would gift to alcoholics to cure them and to regular wine connoisseurs just to make sure they don’t over-indulge. Of course, it was still a luxury to own an amethyst, so only the wealthy would be able to afford to have it. This is just one of the uses for amethyst in Ancient Greece, it was also used in business dealings and diplomacy to ensure honesty and in personal life to bring peace of mind and good fortune.

Amethyst is a versatile and fascinating crystal, and one that everyone should strive to add to their collection both for its properties and historical significance.

So, how do you use amethyst?